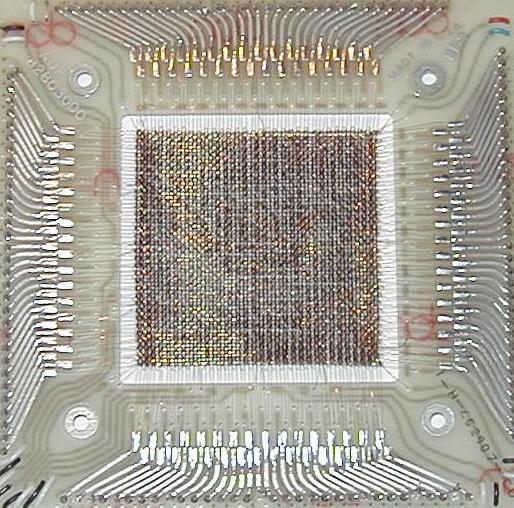 The UNIVAC ganged 8 planes into a stack. Each stack was 8K bytes. Each plane was hand assembled and cost $6000 per plane in the 50's. The core memories consisted of a tiny magnetic doughnuts (1024 in this case). Each doughnut (core) held a single bit. The magnetic polarity of the core held the bit value. To write a bit, there were an X and Y wire. To read a bit there was sense wire. The read process consisted of writing a value to a specific core (indexed via the X and Y wires). If the core flipped magnetic polarity, the sense wire would see it, and the computer would know the bit had been of opposite polarity. If the sense wire did not detect a flip, then the bit value was the same as the one being currently written. Either way, the bit had to be rewritten. Core memory is non-volitile. So whatever was last written (back in the 50s) on the plane I bought is still there. I find this very cool.
---
An inclusive history of the invention of magnetic core memory would include John Presper Eckert, An Wang, Jay Forrester, Jan Rajchman, Mike Haynes and William Papian. Eckert was an engineer that contributed heavily to the ENIAC project, the first electronic computer developed. Wang, as a researcher at the Harvard Computing Lab in 1948, was the first person to implement magnetic cores to store information. These two researchers contributed to the early attempts at creating magnetic core memory that led to the rise of a magnetic core culture. By 1950, Forrester, Rajchman, Haynes and Papian joined this culture and contributed to its ultimate success. Forrester, the leader of Project Whirlwind, adopted magnetic cores in 1949 to meet the memory needs of the project. His ideas on memory were implemented through the research efforts of Papian.
Rajchman, an engineer at RCA, developed his ideas of using magnetic memory in parallel with Forrester and engaged in a long patent suit with him over the invention. Haynes, as a Ph.D. student at the University of Illinois, applied magnetic cores to implement logic and later established the magnetic core research efforts at IBM, the company that ultimately benefited the most from the invention. These researchers all joined and contributed to the magnetic core culture that was solidified through the success of Project Whirlwind.
---
Women using stereo microscopes worked hour after hour stringing, by hand, the wires through these cores that are now standing up on edge with their holes all perfectly lined up. The wires, thinner than hair, have long... 12 to 24 inch stainless "needles" attached to the end, simply for rigidity.
The wire, normal, albeit tiny, is insulated with enamel, or most recently [then] "Formvar"... a high-resistance material that can be stripped with heat, whereas enamel cannot. They would tediously string these rows and rows of core with the needle/wire assembly, then cut the end of the wire close to the appropriate solder land, (leaving a "service loop" for future use), and the coreplane would be completed. One defective or broken core (and they are very fragile), would entail removing the wires associated with that core, removing the core, usually a chunk at a time, and inserting a new core in its place. The removed wires are then replaced...