Paul Terrell started his Byte Shop in December 1975. By January he was being approached by people who wanted to open their own stores. He signed dealership agreements with them, whereby he would take a percentage of their profits, and soon there were Byte Shops in Santa Clara, San Jose, Palo Alto, and Portland, Oregon.

By March 1976, one could identified 4 big retailers; Terrell, Heisers, Peachtree in Atlanta, and Dick Brown. Brown opened his outlet "The Computer Store" like Heiser's in 1975 along Route 128 in Burlington, Massachusetts.

Paul Terrell in his BYTE SHOP 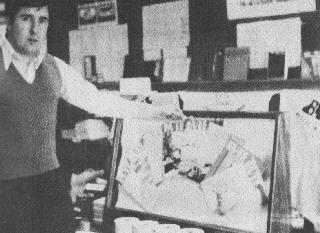 He also was interested in selling Apple I's. Without Paul Terrell and the Byte shop Apple may have never gotten anywhere.

More on this story!